Dude.  That’s enough already.  Yep, the water-meter-reader-guy hung a note on our door.  Cody (El Doggo Destructo) did NOT like how close the house he got, and came running up to the door in full SEARCH AND DESTROY mode.  Hackles fully up in a 5″ strip from his mane to his butt.  Tail fully erect; I could have used it to hang a flag.  I WISH I had a picture of him in full assault mode because it’s absolutely terrifying.   But I don’t.  Sorry.  He doesn’t stay that way very long, and if he’s THAT upset about something, it only seems fair that I check it out  on his behalf and call an all clear.

I DO have Cody in Alert Mode.  This is where he’s in the process of threat-identification.  And I might be biased, but he’s one good looking dog! 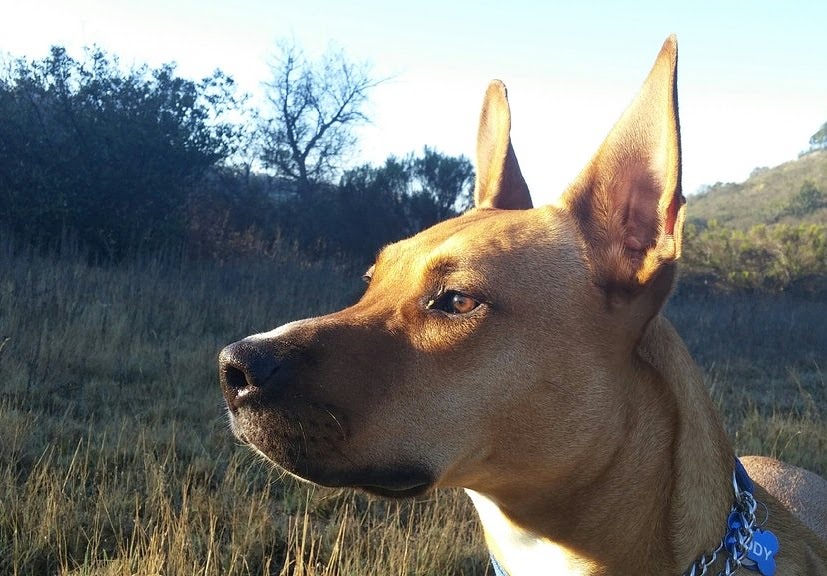 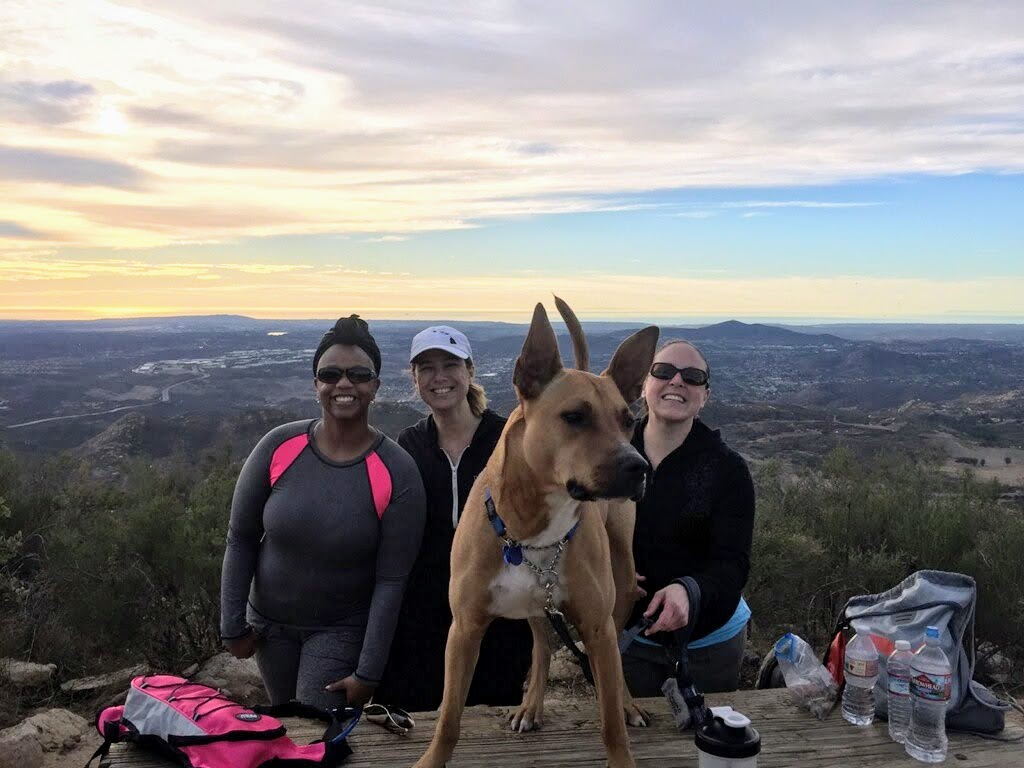 And it’s interesting, because the wife and I wanted your “standard” friendly house-dog.  About 40 lbs., happy to see everyone, boring old dog.  What we got was an incredibly smart dog, with his own unique personality, wants, and needs, who challenges us every day.  We were WOEFULLY unprepared for him.  And there were definitely a number of times, especially in those first few weeks after we adopted him (about 10 months old, March 2017) when we didn’t think we were going to be able to do it.  But sometimes he plays the role of “normal” dog.  Usually when he’s asleep:

But you know what?  We stuck it out.  And we have the coolest dog around.  Yup, he’s weird.  Yup, he does NOT like strangers coming to the house (we’re working on this one and it’s going great!), and he has a low tolerance for rude dogs, but he’s pretty much awesome the rest of the time!

As you can see, he’s a part-time model:

As well as a master of disguise: 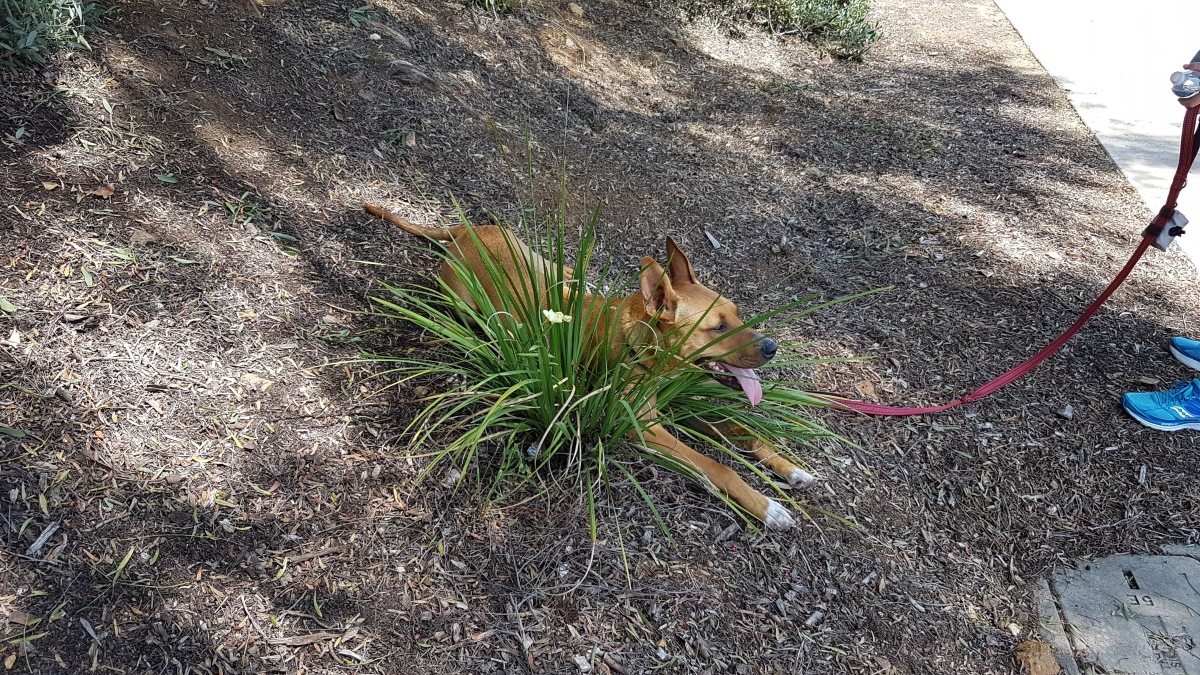 And he’s GREAT with puppies and children: 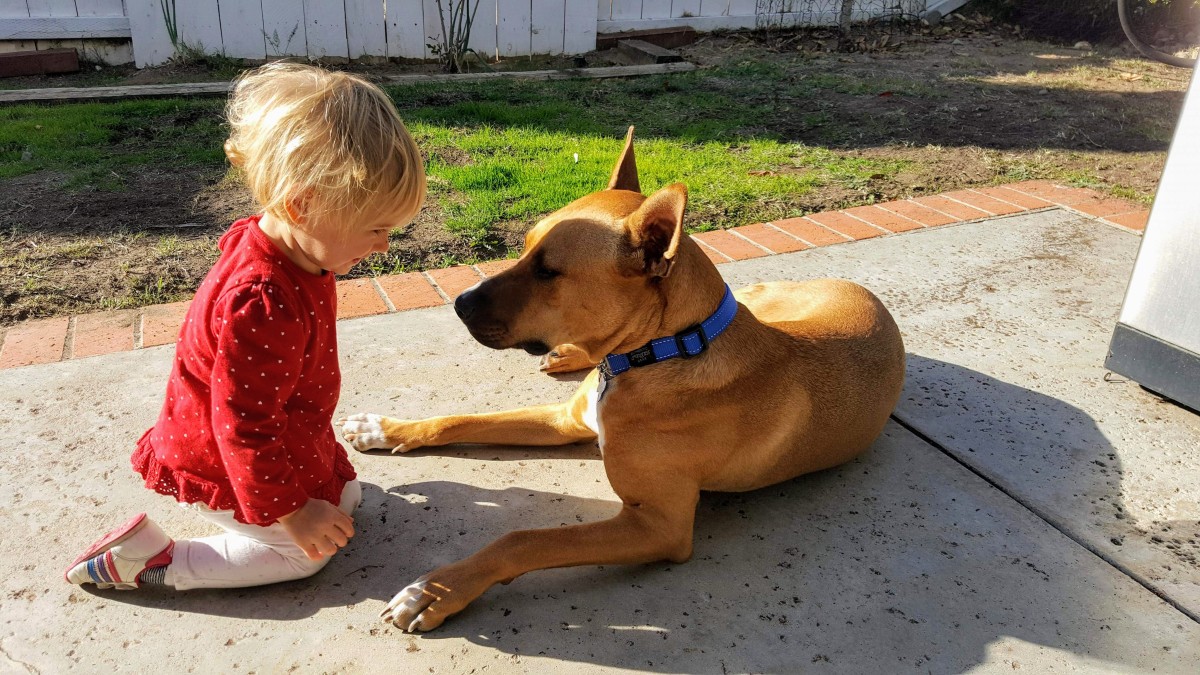 Wow.  This post completely went off the rails.  I started with Barky SirBarksalot, and am ending with… where-ever we are now.  But I will say, he’s been a fun dog to have around.  Even if I often suspect he’s just doing it intentionally to mess with me:

Cheers to you, Cody!

As always, thanks for reading, and you’re welcome. 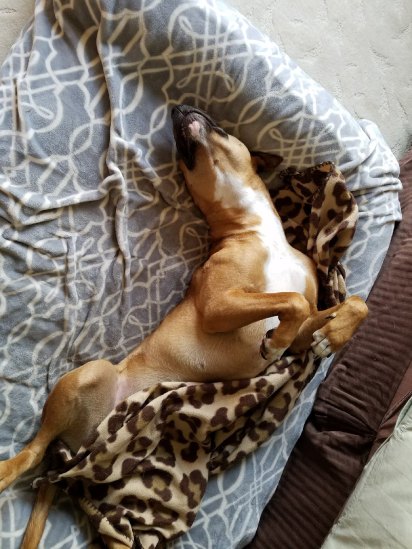 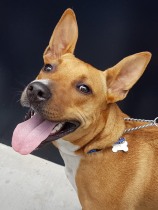 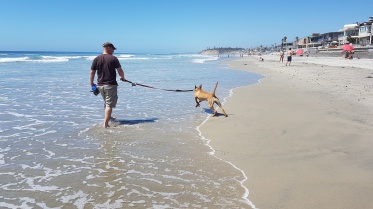 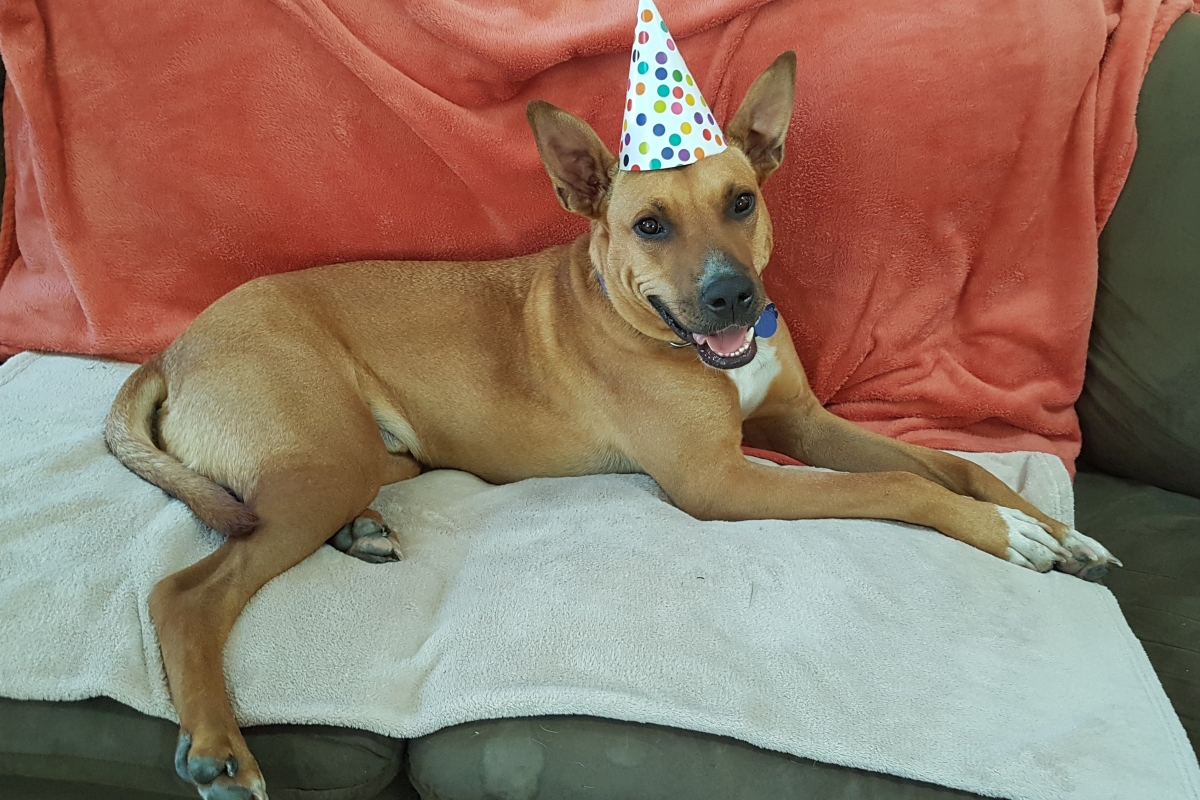 If you read my first installment in this series you know my dog is a shower-licker.  But that’s obviously not his only habit that mystifies.  It’s obvious because otherwise, a) I couldn’t call this a series, and b) you wouldn’t be reading this right now.

So weird habit #2 (and probably Weird Habit #3, although that’s another post) involves his sleeping position, inasmuch as it’s actually possible to sleep like this: 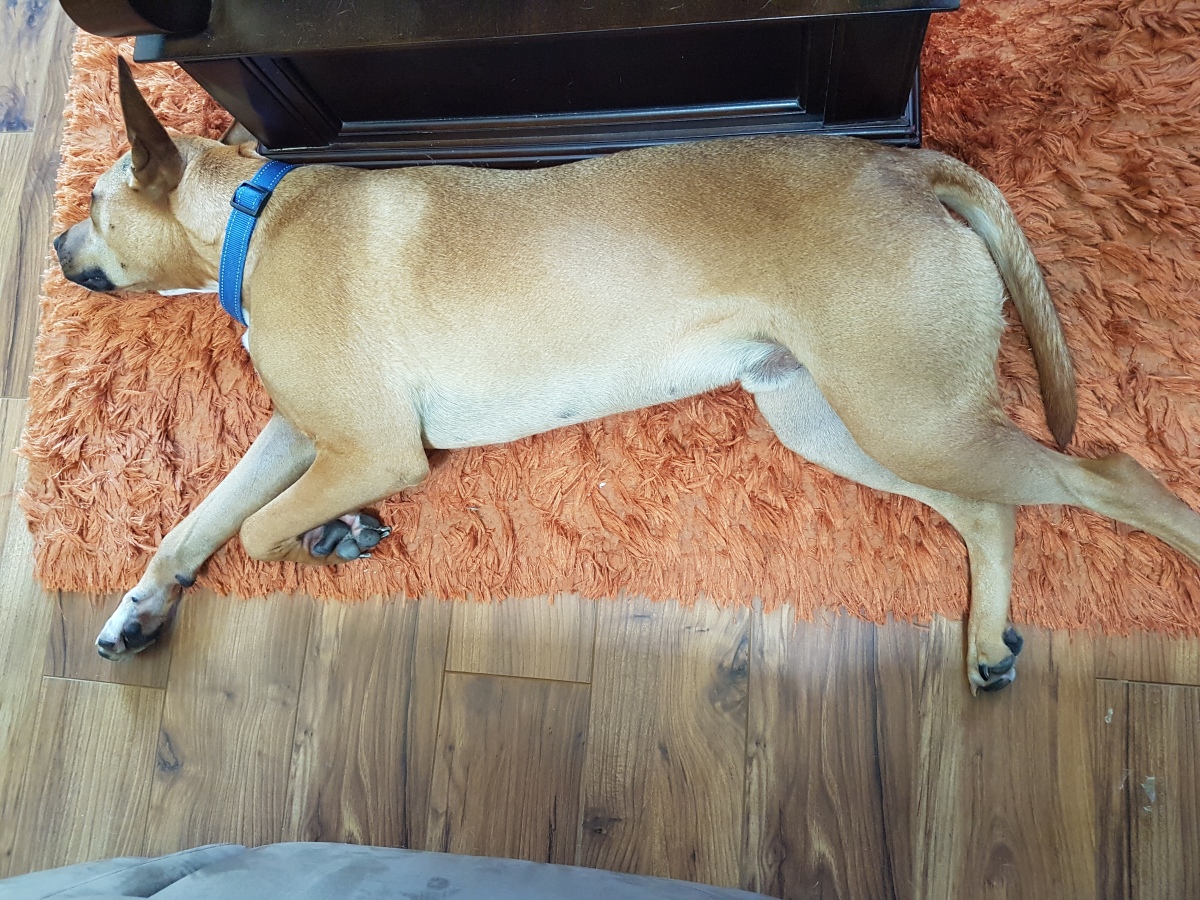 I hear you.  “That doesn’t look so bad,” you say.  “I’ve probably slept against some edges like that in my time.”  Perhaps even, “At least he’s still on the rug!”  And from a certain perspective you’d be right. But fortunately for you, that’s not the only perspective you get.

Well, that looks pretty uncomfortable.  The corner does appear to be poking him a bit.  But maybe another angle will shed some light on the situation?

As always, thanks for reading, and you’re welcome. 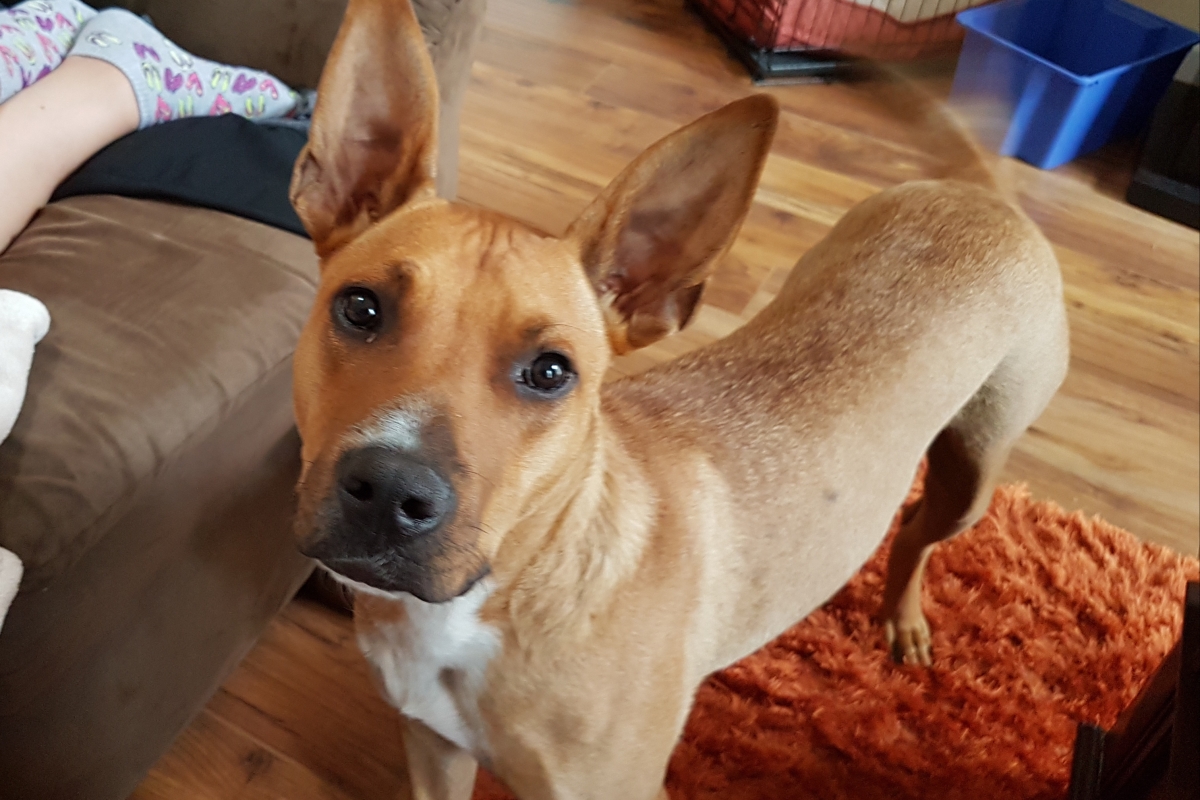 I’m starting a new series of blog posts titled “My Dog Is Weird” today because it’s my pup Cody’s 2nd birthday!  It will be short, and each one will contain one weird thing.  I hope you enjoy them (we sure do, after we’re done shaking our heads)!

Most nights, after he’s tucked into his enormous dog bed under a comfy fleece blanket and asleep, I go take a shower (it’s a walk-in).  After my shower I slide open the door, which is apparently his signal to get up, trot over to the shower, and proceed to lick the water off the walls and floor.

What?  Why?  He’s awesomely house-trained, and NEVER poops or pees in the house so he has a bowl of water in the bedroom that he can drink out of all night if he wants.  It’s the same water, just comes out of the sink instead of the shower!

We used to fight this behavior and tell him “no!” when he did it thinking this was dirty wash-water.  And, to be brutally honest, our shower isn’t NECESSARILY the cleanest in the world, probably.  Regardless, after the 14 months we’ve lived together we’ve started to compromise.  I give the front corner of the shower a heavy rinse after I’m done and he’s allowed his front paws in but not his back. 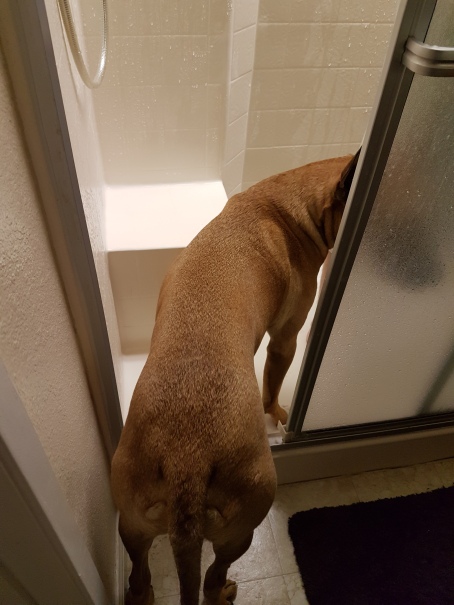 Do your pets do anything strange like this?  In the comments I hope you’ll post something weird your pet (or child) does that keeps you entertained and confused!

As always, thanks for reading, and you’re welcome!

Because why not?  Here are a stack of pictures of El Pupper Perfecto as he does his thing…

If you’re wondering why there aren’t more pictures of him moving, it’s because he’s too fast for the camera to pick up.  I’m working on some slow-motion videos and will have to link through youtube or vimeo or whatever the kids are using these days.

We got a dog.  And not just any dog.  Well, actually, we really don’t know what kind of dog we got. He’s a mutt.  They told us he’s a Malinois/Lab mix.  One day we’ll do a DNA test and find out.  Today is not that day.   I don’t see any lab in this guy.  Malinois?  Who knows.  Those are the dogs the military use to find bombs and hunt terrorists.  These dogs can learn just about anything.  I’m terrified that I got a dog significantly smarter than me.

We rescued him from The Barking Lot (TBL) dog rescue (donate here).  TBL primarily rescues dogs from high kill shelters, but has also been rescuing them from Asia’s dog meat trade by working with the Soi Dog Foundation.  Our dog Cody was dropped off as a stray to a shelter in Riverside, CA in December of 2016 (or January 2017, I don’t remember).  No information was relayed to that shelter, so Cody’s history is a mystery.  He was not neutered, so they did it there.  Ouch.  TBL found him an brought him to San Diego in late January, and we brought him home March 1st.  Although we’re not sure about his breed, we do know a couple things:

Okay, so I just went to quickly grab a couple of photos of him to prove his dogness, and ended up spending the last hour or so looking through pics and remembering the madness of when we first brought him home.  He was SO CUTE.

I mean, come on.  That’s what cuteness is.  But take another look.  He has a knowing look in his eye.  He has a big brain in that enormous melon he calls a head.  Frankly, I suspect he’s only half-listening to me.  One ear is trained on North Korea, and the other is monitoring Chinese subs in the Pacific.

Anyway, I spent too much time reminiscing in photos and now it’s bedtime, so I’ll have to pick this up tomorrow.  Actually, before I go I should give a brief explanation as to the title of this blog.

This is El Doggo Destructo. Why are his paws in the water bucket?  That’s not even his bucket.  It was the communal drinking water for the whole dog park.  But no, his paws were dirty.  They can drink when he’s done. 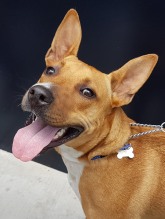 This is El Pupper Perfecto.  He loves all the people and all the dogs and just wants to playall the time!  He’s super excited to be doing whatever it is he’s doing!  WHEEEEEEEEE

That oughta do it.  Goodnight.

So it’s clearly been over a year since I’ve written anything on here.  That’s a bit of time, and as one might expect, kind of a lot has happened.

Although, I suppose that one mightn’t necessarily expect that.  For many, many years look the same.  You wake up, go to work, come home.  Occasionally do something interesting on a weekend.  Rinse and repeat 360ish times (except for the weekends, then only repeat 52 times.  And sometimes holidays, but… meh.) and it’s another year again!  But I digress…

What’s happened?  I got a dog, was laid off, got injured (indirectly by the dog, natch), missed a vacation (DAMNIT), job hunted (unsuccessfully, to date), found a new career, reinjured myself (albeit not as badly), and I feel like I’m forgetting something, but I’m sure it’ll come to me eventually.

You know, it seems like a lot less after writing it out.  But really, Nov-January was business as usual.  The standard week I described above.   Three months of “the usual,” although we had some great visits with family mixed in!

February started our dog search, and March 1st we adopted Cody from The Barking Lot dog rescue.  You see, we’d done a lot of research and given the whole “dog thing” a lot of thought.  We knew what we wanted, more or less.  A 2-3 year old adult female.  Housebroken.  Crate-Trained.  Basic obedience training (sit, stay, lie-down, fetch, etc).  Mellow, but interested in walks and play when we were in the mood (basically medium energy).  About 40 lbs.  Basically a relatively easy dog for first-time dog-owners.  So we searched and looked and googled and visited shelters.

First of all, meet Cody:

Allow me to start off by saying he’s an awesome dog.  That being said, perhaps we compromised on a FEW things.

The good news is that he was definitely housebroken.  The bad news is that he’s super smart, and fairly stubborn.  What that means is that he knows what you want from him, but doesn’t care because OHMYGODTHERE’SADOGOVERTHEREANDIHAVETOPLAYWITHHIMRIGHTNOW! Or “I know it’s bedtime but a stranger parked their car in front of our house BARKBARKBARKBARKBARKBARK!”  Although I do still lock my doors, you’d have to be an IDIOT to try and break into my place with this guy on guard.  He takes his job seriously.  I saw him straight murder a cricket that hopped a little to close to the back door.  It was not a pretty sight.

I’ll do a full post on Cody another time.  For now, just trust me when I say he’s a cool dog, and an enormous PITA.  Fortunately, he’s incredibly cute so it’s hard to stay mad at him for long.

In fact, this one’s getting a little long.  I think I’ll end it here, and pick up Part 2 with “Dude, Where’s My Job?”